The Greek Odyssey - “good-for-nothing but ready for anything”

Panda Optics were thrilled to support a small group of French skiers on an amazing trip to Mount Parnasse in Greece, this unique and unknown area provided an some great skiing and stories from their 10 day adventure.

On Friday the 10th at 11pm, our bunch of boisterous lads leaves Bourg-Saint-Maurice for a trip which was about to last 20 hours between plane and car. As soon as we arrived in Athens we are welcome by Eric, whom will be our “Captain” for the whole trip. Still three and a half hours to drive between sea and mountain and we finally reach Galaxidi where La Belle Lurette is waiting for us. She is a beautiful wooded two-master schooner and will be our HQ for the days of travel to come. Unfortunately, tonight, the strong swell makes it impossible for us to sleep aboard. We put a good Pita away and knock a little glass of “Ouzo” back with Kostas our guidos locos and at last we are getting a well-deserved night of sleep in the comfy beds of the “Miramare” hotel.

Ready to conquer the world, we head off to Mount Parnassus, an hour trip from our floating house. From shorts to Gore-Tex, the contrast is startling. The landscapes are stunning, and as we reach the top a we are happily greeted by a meter of snow which covers the sweet Greek faces. The play-ground is incredible, fresh runs and untouched cliffs are waiting for us…

Excited as kids in a candy shop we quickly drawn the attention of the local heroes, well known as “ski instructors” haha! We are finally on our skis in this little corner of paradise. After quite a few nice runs we are heading back to Galaxidi for a freshly fished diner! What a treat!

First night on the Belle Lurette, we are leaving Galaxidi after a huge breakfast at Kostas aiming to cut into the faces which we did a recce the day before. This

morning, the fog is up and ice is welcoming us but that’s not enough to spoil the sunny mood of our “good-for-nothing but ready for anything” team. Plan B is on and we swap the foggy faces of the Parnassos for some lumberjack work in the forest, down there we stumble upon old hairy “Barrebus”.

Back to Galaxidi, we make the most of the afterglow to relax in our little abandoned inlet.

From the skis to the beach of Galaxidi, it is again a perfect day!

First morning as a sailor aboard our Belle Lurette! After a night rocked by the soft swell we steer toward the Mount Parnassus. We arrived at the resort to find crap conditions, without any visibility. Determined to ride at least a little bit and visit the surroundings of Delphi and Arachova, we still had to come back quite early to prepare the boat for sailing. Not an easy task for our small team of freshwater swabs who are about to leave solid ground tomorrow with Eric Weller (The Captain) ready to rock the helm of the Belle Lurette.

The 16.5m decked ship, built in the 80’s at Maison Lafitte, is a reproduction of an American the schooner, the Malabar VII built in 1926, designed and owned by the architect John G. Alden. Which must certainly ring a bell to any seasoned expert (which we are not).

Everyone up on the deck, ready to tack! Raise the sails ship’s boy! There was just a tiny weather parameter missing, quite needed for a sailboat, the wind! Not a breeze forecast, but that did not demotivate the crew which went on at a top speed of 3km/h. With such a pace, the crew muck around, swimming for the bravest, fishing for some and contemplation of the Greek coast and mountains for the rest, it has what it takes to delight the photographer/cameraman Jord Dubiez (Lost in The World) who couldn’t decide where to shoot. 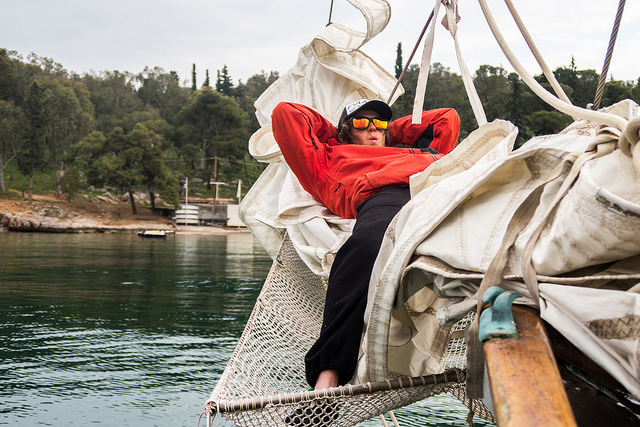 What a nice day of rest which could only do us some good. A nice pita and we fell asleep with our bellies full.

Ski touring on the seaside with a view of the oyster farm, we go on strolling on skis through the olive trees, ski pants being clearly unsuitable on the port and the beach, Jordi and his plans… But what is he thinking about! Thalassa report bodes well!

The local “fishermen” didn’t quite understand, neither did we, but we had a blast, excluding the intense heat in our freeriding outfit under the blazing sun of the shore.

Good fish based diner freshly caught by the local heroes, the fishermen, to end this off the wall day.

7am, a cloudless sky is awaiting us, more motivated than ever the dream-team already sees itself cutting into the faces of Mount Parnassus under the Greek’s sun. Mandatory stops to Koastas’ bakery and off we go.

Wasting no time, it is already time to put on our ski to reach those virgin faces packed with snow scoffing at us from the summit of their mountain.

First runs with the socks up to the ankles but it feels so good!

Later we meet Alain, born French but raised in Greece between Athens and Mount Parnassus. A large-hearted local rider as rarely seen before, he makes us discover his favourite spots, a great pleasure shared.

To end this amazing day we drop by the bothy (lost in the wood), welcomed by a small shooter of local alcohol (pretty bad)… To top it off, we watch one of the most stunning sunsets we’ve ever seen.

It is hard in the morning for the ships boys. We decide to unplug our brains and go to the homemade snow park which includes a module with 2 box, 2 kickers, “far from the X-Games ones” but shaped by keen instructors.

Nice lines among buddies through the homemade snow park and the lips shaped by the frequent wind on Mount Parnassus.

Not an easy day for fishermen, more than freestylers. It feels like it’s kinda our thing to try to send it on freaking hard snow.

Good weather, rise in the temperatures which might means some softened snow in the morning, bingo, all the conditions are gathered, the team put the skins on with one goal, “the highest” summit of the massif (2457m).

No one within sight, breath-taking views of mountains, backcountry and coast with turquoise sea.

Jordi, our crazy cameraman was operational with all his gears (camera, stabiliser, drone …) and produced gorgeous pictures of playful faces with loads of potential.

Imagine how happy you are when your friend, down the face, gives you the “GO!” although Jordi is “not ready” to shoot… After several climb up with the skins of that same face we decide to mount one last summit before coming back, pretty exhausted.

Last day of ride and chill for the ship’s boy. Arrived at the resort for midmorning, we meet with the local crew of Parnassus for some runs together before taking stock of this incredible trip. In the end we change our plans and go toward to the thermal baths of Lamìa guided by our Greek friends Alain and Leon.

As we arrived, we were dumbfounded as we stumbled into a refugees camp gathered around a hot spring. But further away, the secret spot offers more peace and quiet. Some nice chill time in the clear waters of the warm spring.

Once loosen up we head back to Galaxidi to spent our last night on the boat. Not nights of rest though because our new Greek pals have planned a nice festive program in the little streets of Athens for our last evening in Greece.

WHY TWO LENSES ARE BETTER THAN ONE

Where Is The Line?

The Greek Odyssey - “good-for-nothing but ready for anything”